In honor of Mother's Day weekend, today's Fashionable Friend Friday is India Hicks AND her mother Lady Pamela Hicks.  India just named her new fabulous handbag "The Lady P" after her mother and we just LOVE LOVE it.  I cannot decide which I would rather have, the snakeskin or the classic black.  India also shared a fun story of her relationship with her mom.  I have included it below.  It will surely make you smile this Mother's Day.  Also, India introduced some incredible necklaces recently, as well, to check out all the new additions to India's already amazing collection, click HERE.  Bon Weekend! “Mum I named a bag after you.”“Why on earth would you do that?”“Because it’s a smart sensible sized bag with a sensible handle and a sensible safe zip pocket inside, you will really approve.”
My mother can’t understand those trunk-sized bags we all carry with everything including the kitchen sink inside. One of my early memories was her in London, always with a sensible elegant handbag, always going to the hairdresser’s.
My mother’s style is very understated, very refined, except for her hair, which is very overstated. My father being a designer could not resist designing it. “You have a large face” he said “you need large hair.” It was the 60’s after all when they met so luckily for my mother large hair was in, but my mother lamented that of course as the 60’s ended everyone else moved onto blown out hair while her bouffant remained. Can you think of the Elnett hairspray can? The golden tanned can with that beautiful woman and her huge bouffant on the front? I grew up thinking that actually was my mother.
The conversation about the handbag drifted back to hair very quickly. “Ugh it was also the decade of the wig,” she said, “you would have to go away on grand shooting weekends in the countryside. Your hair would have been done by the hairdresser on Friday but on Saturday after breakfast in bed the keen ladies would join the guns on the shoot, the protesting ladies would wait till noon, but after an afternoon of damp and drizzle we were then expected to be presentable for dinner.” So they travelled with wigs rather than hairdressers. An evening wig would be produced out of a box. “Was there a Sunday morning wig?” I asked. “It was all so hideous” my mother said “that I cant even remember.”
My mother’s life before marrying David Hicks was an extraordinary whirlwind if British aristocracy and English eccentricity, Hollywood glamour and political education. Her childhood pets included at different times a bear, two wallabies, a mongoose, and a lion. During World War II she was sent to live on Fifth Avenue with Mrs. Cornelius Vanderbilt.
In 1947 my grandparents were appointed to be the last Viceroy and Vicerine of India and my mother developed lasting and loving relationships with Ghandi and Nehru. She was also a bridesmaid to the Queen and by her side as a lady in waiting when the princess learned her father has died and she was Queen.
My mother, unlike her hair, has moved forward with the times, at 87 she talks as easily with my children as she does with her own generation. “Who the heck is Kim Kardashian?” asked Domino the other day, and my mother was able to explain. Just don’t ask what that explanation was. 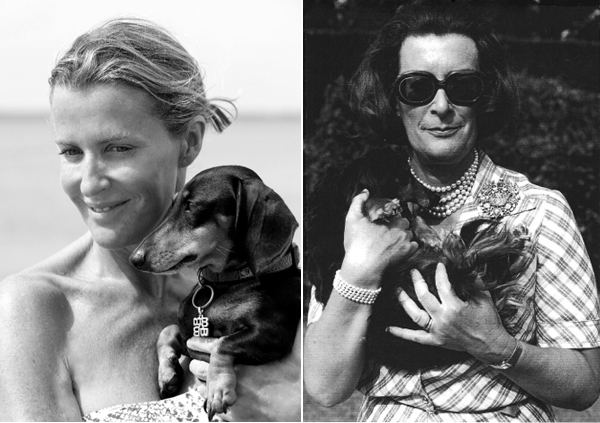